I posted these on Facebook, but I used them again at last night's Vestry meeting, and wanted to share them here.

"Come, Spirit of God, come stand with us in this darkness. Hold the fallen in your arms. Heal the injured. Comfort the broken-hearted. And if you cannot tell us why we do this to ourselves, show us how to love more deeply, that such pain will never be the final word, but rather mercy that needs no explanation. Amen."

I was quite taken by Bonnie Ford's article on ESPN:

I had another sensory memory of the one and only other time I wrote about the regular people on the course of a major marathon. It was in November 2001, when I stood at the finish in New York City and watched runners stream across. Seeing them run for joy, rather than in mortal fear as they'd done just two months before, and seeing people bow their heads in thanks after wrapping themselves in foil blankets, deeply thankful not for the time they'd logged, but simply for being alive, was a profound experience.


I am stricken by the reversal of that image here in Boston, the fact that people were running away from something terrible seconds after running toward something good. But I also know that will turn again.


Amateur marathoners push themselves for a whole host of reasons. To test their physical and psychological limits. To raise money for worthy causes. To compete. The next time this -- or any -- marathon is run anywhere in the world, they will run for yet another. To show that the power of communal achievement can be beaten on one day, but not on most days and never indefinitely. And that is what makes sense on a senseless day.

And, finally this cannot be forgotten:

On the same day as the bombings at the Boston Marathon, 31 people were killed and more than 200 were injured in a series of explosions across Iraq.  (Here's the BBC account).

While we are certainly shocked and profoundly saddened by what happened in Boston, we need to be in solidarity with those afflicted by terror around the world.  We must see that our human spirit is wounded whenever people give way to violence.  At the same time, we are called to be a people who refuse to allow these tragic events to define us as human beings.  God's vision is one that finds new life even in the midst of destruction:  at home, and across the world.
Posted by Kurt at 8:20 AM No comments:

There are few things more joyful than the end of a marathon: true for runners, supporters and volunteers. I am profoundly sad...

The words of Mike Kinman are helpful to me right now:

When events like this happen there is the temptation to get sucked into the coverage and spend hours in front of the TV. Resist that temptation. Giving in to it only gives power to those who would kill and maim and destroy. You will lose nothing by waiting until 10 pm for an update or waiting until morning. But if you use that time caring for someone in need, or saying your prayers, or even having a cold beer with a good friend ... you will have done your part to testify that the forces of evil will never, ever be victorious.

Where do we go from here? Buffy's "Once More, with Feeling"

Once More, With Feeling
Season 6, Episode 7

The famous musical episode is both an incredible tribute to the musical genre, as well an incredible accomplishment for a fifty-minute show. I chose it in this case, however, not for its style, but its substance.

The sixth season of BtVS is sometimes talked about as a disappointment. Some fans even swore off the show at this point. I think the truth is that BtVS was hard to watch in the 6th season because the show was really dark. It was difficult to watch characters that we have grown to love hit such lows.

That, however, mirrors real life.

The musical episode crystallizes this, centering on Buffy's inability to tell her friends that, when they resurrected her, they pulled her not out of hell and torment, but out of heaven.

(The base assumption: she sacrificed her life at the end of Season 5 to close a hell dimension. In order to justify using magic to bring Buffy back to life, her friends convince themselves that she must be stuck in hell.)

Being pulled out of heaven, (full of joy, at rest and in peace), Buffy is now back to the endless fighting of evil. That seems like hell, and she feels none of the passion that she felt while she was alive before.

Buffy can only confide in Spike: soulless, undead, and in love with Buffy.

That's not the only thing going on. Willow is treading water in her growing addiction to magic: which started with Buffy's death, realized with the spell to bring her back to life, and has continually worsened. She has committed a terrible act against her lover Tara, a memory-altering spell to "forget" the fight they had about Willow's magic use.

Dawn, meanwhile, is shoplifting, moping, and getting herself into deeper trouble, craving the attention lost from the death of her mother and the "sleepwalking" Buffy.

Xander and Anya continue towards their wedding date, hiding the fears that they have from each other (Anya's fear that Xander will hurt her and stop loving her, and Xander's fear that he will hurt her.) Ironically, they both have different aspects of the same fear, and instead of dealing with it, they push on to the wedding.

Finally, steady Giles is convinced that he's in the way of Buffy's growth. Buffy's inability to take adult responsibility (for Dawn, and for herself), always leaving the "adult decisions" to Giles, seems to be growing worse.

The brilliant plot device, as in the case of musicals, is that the truth comes out in song. Hurts and fears are sung (to each other, and the audience) thanks to the spell of a demon. Beating the demon doesn't change the fact that everyone has been hiding the truth from each other (and themselves.)

The characters have yet to hit rock-bottom, but the plot and dialogue expose how difficult it is to live in this world. "Where do we go from here" is the final question: and the answer (as in real life) is, at this point, unknown.

One of the finest hours of BtVS: perfectly setting up the rest of the season towards the faceoff with the season's "big bad", life itself.

Ran across a post using this Emily Dickerson excerpt for preaching on "Doubting Thomas" (in a thoughtful reflection by UCC minister Nancy Rockwell):


Hope is the thing with feathers, That perches in the soul, And sings the tune without the words, And never stops at all.
- Emily Dickinson


Yes, we remember him as "Doubting Thomas".  When we use that phrase, we assume a position that is bad and should be avoided, as this Facebook picture suggests: 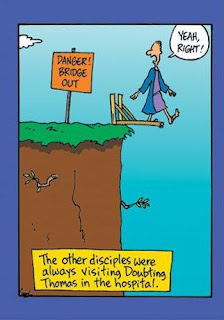 (Cartoon by Inherit the Mirth, on Episcopal Church Memes)

I've preached before on Unbelieving Thomas, but I thought it best to highlight his three episodes in The Gospel of John (the only of the four canonical gospels to tell more than Thomas' name).

NOTE:
[Elaine Pagels' Beyond Belief takes an in depth look at The Gospel of Thomas, and suggests that John's gospel was written in part to counter it.  She makes persuasive arguments that could certainly be true, and her book is an excellent read.   But I think it is also fair to suggest that Thomas' doubt in John's gospel is not really a bad thing at all.  For the sake of this blog post, I'll venture again down that road, but check out Rick Morley's 2011 use of Pagels' ideas.]


Earlier in John’s Gospel, when Jesus decides to go to Bethany to heal Lazarus, Thomas says to his fellow disciples, “Let us also go, that we may die with him.” (John 11:16)

There was grave danger to Jesus in Bethany: people were already trying to kill him. Thomas knew that there was a good chance that none of them would live after such a trip. Thomas is professing a willingness to follow Jesus into very real danger. This is not someone who lacks faith.

Scene number two with Jesus is during the last supper.

‘Do not let your hearts be troubled. Believe in God, believe also in me. In my Father’s house there are many dwelling-places. If it were not so, would I have told you that I go to prepare a place for you? And if I go and prepare a place for you, I will come again and will take you to myself, so that where I am, there you may be also. And you know the way to the place where I am going.’

Thomas said to him, ‘Lord, we do not know where you are going. How can we know the way?’ Jesus said to him, ‘I am the way, and the truth, and the life. No one comes to the Father except through me. If you know me, you will know my Father also. From now on you do know him and have seen him.’

But after this, Thomas (along with the other disciples) fails miserably.  He runs away when Jesus is arrested.  He remains in hiding when Jesus is crucified.  All of his good and sincere intentions have been overwhelmed by fear.
So when the other disciples tell Thomas “We’ve seen the Lord,” he doesn’t believe their words.  He even makes an outrageous request: “Unless I see the mark of nails in his hands, and put my finger in the mark of nails and my hand in his side, I will not believe.”

Now, Thomas is asking for some serious proof. The question, is why? What’s going on here? Why this extreme reaction?

Imagine what it must have sounded like to Thomas when the disciples came to him, saying that they had seen the Lord...

But Jesus gives Thomas what he needs in this morning’s Gospel.  He restores his hope, to which Thomas responds in the pinnacle saying “My Lord, and my God!”

Isn’t this the ultimate reflection of “I am the way, and the truth, and the life. No one comes to the Father except through me. If you know me, you will know my Father also. From now on you do know him and have seen him.”

Thomas voices what he has now seen.

“Blessed are those who have not seen yet believe” then becomes a mantra for John’s audience (who live in the faith without the firsthand experience of the risen Christ) rather than a putdown of Thomas, who now stands fully in the hope of God.

Christians are called to be Easter people:  that means people marked by hope.  It is to permeate every aspect of our lives, and it is in hope that we work together to make God’s vision of love, peace, and justice come true.


Hope is the thing with feathers,
That perches in the soul,
And sings the tune without the words,
And never stops at all.