The Muppets Do Queen

Momma! Momma? MOMMMMMMAAAAAAAA!!!!
Posted by Kurt at 10:23 AM No comments:

Belonging to Each Other

We all belong to God's Kingdom.

This is illustrated by an observation by Rodger Nishioka:

"Most children at some time in their childhoods get frustrated enough at their families that they decide to run away. This decision often happens in some dramatic fashion. Pronouncements are made. Important items are packed, and some food is gathered for what will no doubt be a long and arduous journey. For many years, the prevailing wisdom offered by specialists recommended that parents and caregivers engage in conversation with the children, acknowledging their frustration and then discussing with them logically where they would go and how they would live, eventually dissuading the children from running way. This advice, while certainly reasonable, has given way lately to an alternative response. Now it is recommended that parents and caregivers simply tell children, “No,” explaining that they may not run away because, “we belong to one another’ and that when persons belong to one another, even when they are frustrated and upset, they stay with one another." (Feasting on the Word, Vol. 4., Ed. David Bartlett & Barbara Brown Taylor, p. 332)

Now, I’m compelled to acknowledge that with human relationships, one of course must allow for situations of abuse or neglect that warrants intervention or even leaving, but you can see Nishioka’s point concerning our relationship with God and with the community as a whole that we are belong to each other.

Belonging might seem like a strange theme for this morning. After all, the final Sunday of the church year, “Christ the King”, or “The Reign of Christ” often points people towards what they think is the end of the world, marked by Christ’s second coming.

This often gets understood, throughout the ages, as the destruction of the world. In modern times has manifested in the Left Behind series, and with “documentaries” like the History Channel’s 2012 that I mentioned last week.

The theology behind these examples, however, is not biblical. Our readings today point not to God’s destroying the world, but of God’s abundant love for the world.

And it’s all about belonging...

Pilate’s question to Jesus “Are you the king of the Jews,” is asking whether or not Jesus is claiming to be the king of the Jewish nation...a nation that in theory might replace the Roman leadership. “Whom do you belong to?” questions Pilate. Jesus explains that his nation, his kingdom, is a theological reality, not a political one. Jesus does not seek to replace Caesar with himself or another leader more to his liking. Instead, Jesus is advocating belonging to God’s kingdom, where we all belong and all share responsibility.

This is the end of the world, of sorts: the end of political systems of people lording over people: whether the ruler is wise and kind, or rules with an iron fist. My friend, Sarah Dylan Brauer wrote: 'End' means the passing away of what is. It means a transition so pronounced that we can say, "Things will never be the same." Facing 'the end' means that we must finally acknowledge our attachments to what is, and our limitations in perspective and power as mortal human beings. 'The end' means that we will no longer be able to deny or dodge them, and we will -- we must -- let go. This is frightening for us -- and the more we cling to illusions that what we know is all there is and can control all we know, the more frightening 'the end' will be .”

Bruce J Malina writes that one of the greatest challenges for Americans in reading the Bible is to understand the difference between the US emphasis on the individual and the Mediterranean emphasis on the community. Malina explains that in the world of the New Testament, a person did not think of himself or herself as an individual who acts alone, regardless of what others think and say. Rather, the person is “ever aware of the expectations of others, especially significant others, and strives to match those expectations. This is the group-orientated, collectivistic personality, one who needs another simply to know who he or she is.” (Feasting on the Word, Vol. 4., Ed. David Bartlett & Barbara Brown Taylor, p. 336)

When Jesus tells Pilate that all who listen to Jesus’ voice belong to the truth and are part of this kingdom, he is saying, in Mediterranean fashion, that belonging is less about individual decisions and more about collective participation in a community that transcends the self. Jesus understands that his role is to testify to the truth. (FOW, , Vol. 4., Ed. David Bartlett & Barbara Brown Taylor, p. 336) What happens to him…whether Pilate has him killed or not…does not change the fact that the reign of God is at hand.

Nishioka concludes that the kingdom is present wherever Jesus is present. It is present wherever we experience the reign of God through God’s invitation, healing, and restoration—but our belonging is not up to each one of us alone. Our belonging is up to God. That is the new reality that Jesus proclaims. That is the new truth to which all of us---the community of those invited, healed and restored--belong. (FOW, Vol. 4., Ed. David Bartlett & Barbara Brown Taylor, p. 336)

The End of DC Charity

This is a November 12th article from Episcopal Cafe:
DC Roman Catholics see end to charity; The Episcopal Bishop Responds

The Catholic Archdiocese of Washington said Wednesday that it will be unable to continue the social service programs it runs for the District if the city doesn't change a proposed same-sex marriage law, a threat that could affect tens of thousands of people the church helps with adoption, homelessness and health care.

The Episcopal Church and the Roman Catholic Church have significant theological differences on the issue of same-sex relationships, so perhaps it is not surprising that the social service organizations affiliated with the two Churches have reached different conclusions regarding the effect of the legislation to legalize same-sex marriage currently under consideration in the District of Columbia.

Our partners in ministry have expressed no reservations about the legislation. Episcopalians understand that none of us has the right to violate the human rights of another individual. That’s the law of the District of Columbia. More important, it’s at the core of the Gospel. I hope that the least among us will not be victimized by the struggle over this legislation, and I pray that people of faith will come forward to provide food and shelter if the need arises.

The Catholic Archdiocese in its press release is careful to say "the committee’s narrowing of the religious exemption language will cause the government to discontinue our long partnership with them."

What do you think: Is that an ultimatum? Or is their logic Orwellian?

A plainer statement would be: We could not in good conscience adapt our practices to meet the requirements if this bill were to become law; that would result in an end to our partnership with the District.

That's right. The Roman Catholic Archdiocese of Washington is holding poor people hostage in order to keep gay and lesbian persons from getting married. They are willing to trade the indigent for getting their theological way.

First off, I applaud Bishop Chane's response, especially the quote, "Episcopalians understand that none of us has the right to violate the human rights of another individual. That’s the law of the District of Columbia. More important, it’s at the core of the Gospel."

I also wonder how those that the DC Roman Catholic Diocese are currently serving will feel about losing their services for this position. Will they blame gay and lesbian persons? Will they blame the government officials who made the laws? Or perhaps they'll just see the Church as completely uncaring and out of touch.

Regardless of who get blamed, there can be no doubt as to who loses...
Posted by Kurt at 8:51 AM 1 comment:

Haven't posted a sermon for the last three weeks: two of them had considerable "off text" time, in that I wasn't speaking from a text. In order to translate that type of sermon to the blog, I have to do it RIGHT AWAY...
Guess what? I didn't do it right away... :)
This past week I was not in the pulpit. The deacon here, Paul Higginson, gave an excellent sermon. I heard it at the 8AM service.
At 10AM, I spent the first half of the morning (up to the Peace) with the children of our congregation. We had an interactive talk on baptism that I really enjoyed having with them.
I'm back in the pulpit this Sunday, and I'll make sure I get that sermon up. I need to get working on it: our Diocesan Convention is this Saturday. (who am I kidding? I'll be up late/up early Sat/Sun finishing it!!!)
Posted by Kurt at 7:36 PM No comments: 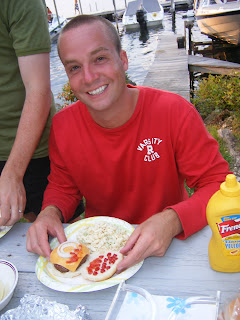 (My cousin Ron and his creative burger making technique. Note my arm next to him...I'm busy making my own burger. Ron participated in the Facebook conversation)

I had an interesting Facebook conversation this past week on eating meat. I read an article on CNN.com about Jonathan Safran Foer's upcoming book: "Eating Animals." The link to factory farming, flu, and the environment.

To pull out a highlight:

We need a better way to talk about eating animals, a way that doesn't ignore or even just shruggingly accept things like habits, cravings, family and history but rather incorporates them into the conversation. The more they are allowed in, the more able we will be to follow our best instincts. And although there are many respectable ways to think about meat, there is not a person on Earth whose best instincts would lead him or her to factory farming. My book, "Eating Animals," addresses factory farming from numerous perspectives: animal welfare, the environment, the price paid by rural communities, the economic costs. In two essays, I will share some of what I've learned about how the way we raise animals for food affects human health.

I'm not at the point where I really want to be a vegetarian: I enjoy meat dishes a great deal. However, I must admit that there are serious problems in the meat industry: ethical problems about the treatment of animals, as well as problems that result in medical problems for humans, and environmental issues. I want to take this seriously.

So, below is my Facebook post, and the comments that followed. There are some great suggestions for books and additional links.

Kurt C. Wiesner I've never REALLY tried to stop eating meat, but I feel like the other option is to really learn where the meat & dairy I eat comes from. Do I have that much time & energy to build those relationships???